"Drug Shortages Became a Worry at Hospitals Around the Country" 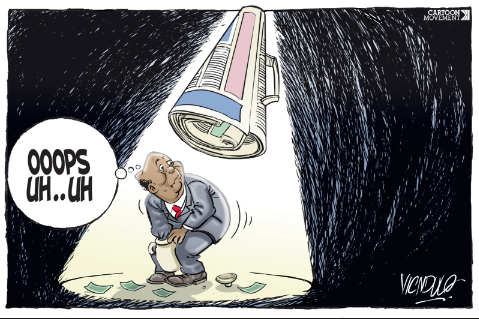 "More Hospitals Change the Way They Buy Drugs and Supplies"

"Hospital Network's Switch is a Blow to Novation"

"A Persistent Small Supplier Gets Contract for Hospitals"

"Accusation of Conflicts At a Supplier To Hospitals"

"A Mission to Save Money, A Record of Otherwise"

"Hospitals Find Buying Groups May Not Come Up With Savings"

"Hospital Products Get Seal of Approval at a Price"

"It's just like payola." Buying groups are "getting paid" to buy certain products, said Mr. Lombardi, whose hospital system dropped Premier [one of the two largest GPOs] in 1996.

"Why Salt and Water in a Bag Became Scarce"

MONOPOLIZED: Life in the Age of Corporate Power, a book by David Dayen

"How Sole-Source Captured My Soul...and Blew My Response to the Pandemic"

"Here’s one reason medical costs are high: We have shortages, and Made in America isn’t working"

"Behind the Coronavirus Threat, a Middleman Destroy Prescription Drug Markets"

"How the Drug Industry Sacrifices Children with Cancer"

"Do GPOs Play a Role in Drug Shortages?"

"Identifying the Root Cause of Drug Shortages: A Call to Action"

"Meet the Rebates, the New Villain of High Drug Prices"

Journal of the Association of American Physicians and Surgeons, Summer 2018

"Where Does the Law Against Kickbacks Not Apply? Your Hospital"

"Facing the Shortage of IV Fluids"

"Escalating Drug Prices: Not All Is What It Seems"
American Council on Science and Health, Oct. 4, 2016

"Iron Curtain of Drug Pricing Will Topple the Healthcare System"

"Drug Prices Too High? Sometimes, They're Not Costly Enough"

"Hospital Drug Shortages: What is Really Causing Them?"

"FDA is Not the Problem"

*Note: Article is mistitled, in our opinion. Header should have read, "GPO execs accuse each other of anticompetitive practices, unethical conduct in causing shortages"

"Getting a Handle on Drug Shortages"

'“Doctor, We Have No Saline Today”: The Curious Case of the Generic Injectable Drug Shortage'

"The Scary Reality of a World Without Meds"

"Pay-to-Play: The Impact of Group Purchasing Organizations on Drug Shortages"

Letter to the Editor in response to Oct. 2013 article on drug shortages by McKeever et al

"Nitroglycerin, a Staple of Emergency Rooms, is in Short Supply"

"As You Were Saying: Drug Shortages Plague Hospitals"

"Generic Injectable Drugs Get a Boost"

"Shortage of saline cause hospitals, dialysis center to scramble to manage supply"

​"Editorial: What is the Solution to Drug Shortages?"

"Drug Shortages: Why They Happen and How They Can Be Solved"

"The Soaring Cost of a Simple Breath"

"How a Cabal Keeps Generics Scarce"

"Premier’s IPO Rumors Confirmed –Is MedAssets Being Cast as the Industry’s Torch Bearer?"

"Drug Shortages Not Going Away"

"Taking the risk: Despite meningitis outbreak, some hospitals have little choice but to rely on compounding pharmacies"

"In a Drug Linked to a Deadly Meningitis Outbreak, A Question of Oversight"

"Drug Shortages? Look to the Middleman"

"Obama Tries to Speed Response to Shortages of Vital Medicines"

"Congress Should Puncture This Cartel"

"An Empirical Analysis of Aftermarket Transactions by Hospitals"

"Watch Out for GPOs"

"Paying for Health Care---Will Congress Have the Guts to Bust This Trust?"

"Blowing the Whistle, Many Times"

"Type of Penicillin in Critical Supply"

"Examine the Questionable Side of GPOs"

"Locked Out of the Hospital"

"When Important Drug is Scarce"

​HRDI: A Secret Slush Fund for Hospital and GPO Executives

"Conflict Case at Hospitals is Settled"

"Hospital Chiefs Get Paid for Advice on Selling"

Note:  Articles and documents with links highlighted in red contain material on GPOs and drug shortages

Premier Inc. Board Sued Over $474 Million Payout to Insiders"

"Hijacking at the Hospital"

"Wide U. S. Inquiry into Purchasing for Health Care"

"Letter to the Editor: Favoring a Fee-based GPO System"

"Who Wins and Who Loses from Premier's Relationship with Montefiore?"